The city of Veracruz in the state of Veracruz is home to Mexico’s oldest, largest and historically most significant port. Managing 16 million tons of cargo a year, the port has become a hub for warring drug cartels, who utilize the port and its route in and out of Mexico for drugs and gunrunning, extortion, protection rackets and kidnapping.

Caught in the middle of the cartel war are the citizens, resulting in 35,000 deaths and a crime-filled environment that includes schools where boys as young as 12 are recruited into the cartels as slave laborers and killers.

Posters promoting the 21 precepts of The Way to Happiness were created with the sponsorship of the Veracruz city government.

Veracruz native Aurora Gomez Brana wanted to do something about the deplorable conditions in her homeland. “I started because my city and state urgently needed help,” she said, and set out to reach the “underworld” generating the crime and violence. Knowing that the root of any problem is the decline of basic moral values, Aurora felt she found the perfect tool in The Way to Happiness and its 21 precepts, known for restoring calm to turbulent areas.

Gomez and her team first delivered a series of The Way to Happiness seminars to business leaders, leading to distribution of the booklet in the daily newspaper Free Voice: Imagen in 29 Veracruz communities. The publisher also screened The Way to Happiness public service announcements on the electronic billboard on the exterior of company headquarters.

Next, a taxi company gave booklets to their drivers to hand out to passengers, while restaurants in Mexico’s biggest chain printed placemats with The Way to Happiness precepts and played the PSAs on in-house screens. Soon the booklets and PSAs were being distributed by businesses ranging from movie theaters and florists to locksmiths and fashion boutiques.

Gomez next partnered with transportation systems. La Tapo bus terminal, one of the world’s 20 largest bus terminals, played the PSAs on their big screens to 75,000 passengers daily and ADO bus company aired the PSAs on their 1,300 buses for three months, reaching 11 million passengers. The First Lady of the Veracruz district of Alvarado hosted an International Day of Happiness conference for 200 city officials, with a presentation of The Way to Happiness. Next came a request from city and state officials for an International Women’s Day seminar for 5,000 at Benito Juarez stadium.

Media company IMU picked up the campaign and placed The Way to Happiness posters on 300 large bus stop kiosks in Veracruz and across Mexico, reaching more than half a million people. The state’s largest TV station, Televisa Veracruz, aired the PSAs. All support came with one purpose—to spread peace and calm.

To reach schoolchildren before the gang recruiters could get to them, the TWTH team launched seminars in schools, soon receiving authorization from the Secretary of Education of Boca del Rio to deliver to every school of the municipality followed by the State Ministry of Education greenlighting lectures in 20 municipalities.

Four years later, the Veracruz city statistics report tells the story: homicides down 33 percent, extortion down 60 percent. And Aurora Gomez Brana and The Way to Happiness team say they are not stopping.

OUTREACH: UNITED IN PEACE
but one example of how anyone can reach out with The Way to Happiness

United in Peace is a growing multiethnic, multifaith popular movement that works to unite diverse people to work together to bring peace to inner cities. They use The Way to Happiness with their own custom orange cover. Peace Rides bring together motorcycles and lowriders, traditionally representing warring gangs, to ride together through communities passing out The Way to Happiness and the message of peace. 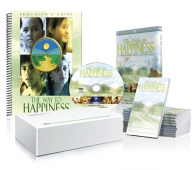